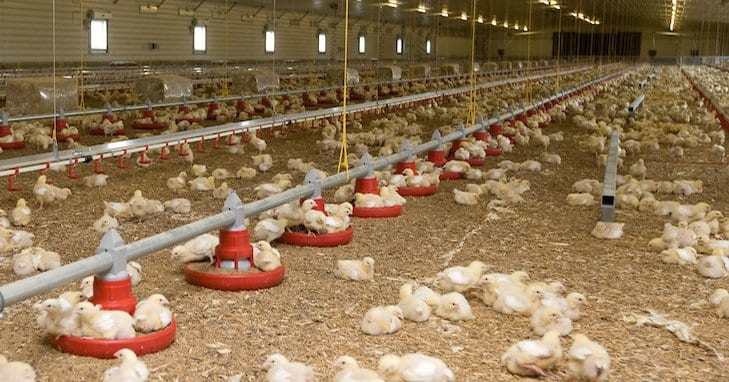 THE poultrymeat sector has hit back at comments made by prime minister Boris Johnson that the price of chicken was ‘crazy’ primarily due to rising fuel prices.

However, a British Poultry Council spokesperson said that all inputs were up – and government policy surrounding trade and labour availability was to blame for the price inflation.

“For some context, our largest producer, 2 Sisters Food Group, has publicly stated that food inflation at 15% is likely.

“It’s not ‘mainly fuel’ that’s the problem… It is everything. Input costs like water, labour energy and feed are all up,” the BPC said on Twitter (see below).

“Combined with trade barriers, shipping delays for machinery plus a skills shortage (vets & lorry drivers), this all adds a cost that has to be recovered through the marketplace.

The BPC called for a fairer trade policy with Europe – saying that BPC has lost £85m in chicken exports to the EU last year as a result of unreciprocated trade controls.

And it also said investment in domestic supply chains should be a priority.

“We produce a billion birds a year, around half the meat this country eats.

“For both consumers & producers to weather this storm, we must see Government prioritise the resilience of domestic supply chains with interventions that back British food producers.”

For some context, our largest producer @2SFG has publicly stated food inflation at 15% is likely.

It is not “mainly fuel” that’s the problem, as PM said in his @GMB interview. It is everything. Input costs like water, labour, energy & feed are all ⬆️. https://t.co/J1aRlDOQwj

The price of chicken has rarely been out of the news this week, with the Sunday Times reporting comments from Co-Op chief executive Steve Murrells, who said poultry could become as expensive as beef.

He said: The chicken industry has particular challenges because of the feed costs.

“The majority of cattle raised in this country are fed grass and it is not required to have high-dense feed.

“Chicken, which was incredibly cheap and great value for money, is rising quicker than any other protein.”