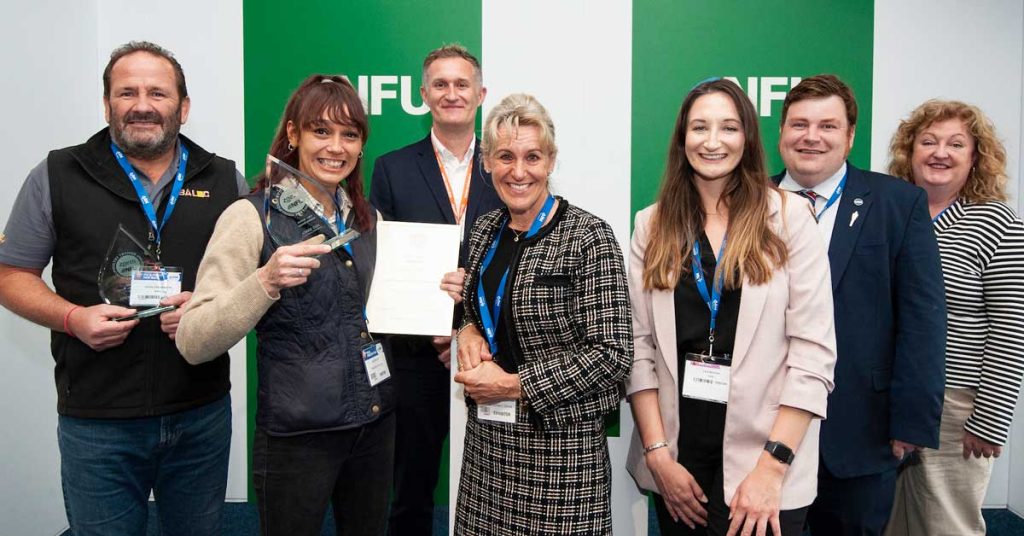 Cheshire farmer Aimee Cox has been named winner of the the 2021 Zoetis-NFU Poultry Trainee Award.

Ms Cox was presented with the 2021 Zoetis-NFU Poultry Trainee Award at the British Pig and Poultry Fair at Stoneleigh Park, Warwickshire in mid-May.

Aimee, who helps manage broiler chickens for Red Hall Farming at Leighton, near Crewe, was awarded the trophy by NFU president Minette Batters.

Ms Cox took an early interest in hatching chickens, ducks and quail, but began a career in the equine world before returning to her love of poultry.

After initial experience on an egg farm, she joined Aviagen Turkeys and became R & D farm supervisor working with some of the UK’s top poultry scientists, nutritionists and geneticists for four years.

As part of the award – now in its 15th year – Aimee receives a £2,000 training grant sponsored by Zoetis to help further her career.

James Porritt, national pig and poultry manager for Zoetis, said every year he was impressed by the high calibre of entries.

“It is really good to see all the talent coming up in the poultry industry,” he said.

“We need to keep hold of and nurture this talent and make sure they go forward, taking advantage of lots of opportunities in our industry.

“The finalists are going to be strong ambassadors for the industry.”

James Mottershead, NFU poultry board chair, added: “The NFU is proud to continue supporting this important award for the industry.

We have already seen talented individuals progress from winning the training grant to becoming key members of the industry and we hope to continue identifying future ambassadors for the poultry sector.”

The other finalists were Jack McAlister, who has a managerial role at the Hendrix Genetics hatchery, near Peterborough, and Stefan Burca and Victoria Axon, who both work for Cobb Europe on their great grandparent breeder farms in Norfolk.

The awards were judged by James Porritt and Lucy Berriman of Zoetis and James Mottershead and Jo Travis of the NFU.

The 2022 award will launch in the coming months, with the presentation towards the end of the year.