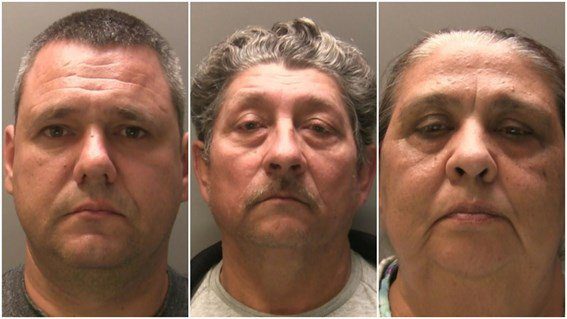 Three people who exploited and abused a vulnerable worker in South Wales have been convicted of modern slavery offences.

Normunds Freibergs, Jacobus Stankevicius and Ruta Stankeviciene forced the victim to work to pay off ever-increasing “debt” while at the same time keeping his wages, according to the Gangmasters & Labour Abuse Authority (GLAA).

See also: Find out more about your rights as a worker on the GLAA website

The defendants also controlled his passport and bank card, stole parcels sent from family members, and threatened him with violence if he ever attempted to leave.

Jurors at Newport Crown Court returned guilty verdicts against Mr Freibergs, Mr Stankevicius and Mrs Stankeviciene on 24 August. They will be sentenced later this year.

GLAA investigators arrested the defendants during an operation supported by Gwent Police in October 2018.

The victim had been referred to the GLAA by a licensed recruitment company after concerns were raised by staff at a poultry processing factory run by Avara Foods in Abergavenny, where he had been working.

Mr Freibergs had been posing on Facebook as someone who worked for a recruitment agency and could help foreign nationals find work in the UK.

The victim contacted Mr Freibergs and was promised work in a bakery and living costs of £85/week.

Mr Freibergs charged him for arranging accommodation as well as for helping him to obtain a National Insurance number and taking him to register for work at a recruitment agency.

The victim began working at the poultry factory shortly before Christmas in 2017, earning as much as £500/week.

However, his wages were paid into bank accounts that only the three defendants had access to.

Now in his early 30s, the victim was supported by the GLAA and entered the National Referral Mechanism, a government framework providing for those who are trafficked and exploited for their labour.

He now has a job in another part of the UK and is doing well.

GLAA Investigating Officer Laura Thomas said: “Exploiting vulnerable workers is completely unacceptable, and we will not stop in our efforts to bring those who treat people as commodities to justice.

“I am pleased that the jury has listened to the compelling case we put forward and has concluded unanimously that the three defendants exploited this vulnerable worker.”

Avara Foods people and communications director Andrew Brodie said: “We are delighted that we’ve been able to play a part in identifying this hideous crime, bringing the perpetrators to justice and providing meaningful support to the victim.

“When we say that modern slavery has no place in modern society, we mean it: this result is proof that our checks and controls, and close relationships with enforcement agencies, are well established and effective.

“Our priority throughout the incident was to protect the victim, through careful and confidential management of the case and by supporting them into free employment, including elsewhere within our business.”

Mr Freibergs, 40, of Morley Close, Newport, will be sentenced for forced or compulsory labour and human trafficking offences under the Modern Slavery Act on 28 October. He was cleared of acting as an unlicensed gangmaster.

Mr Stankevicius, 59, and Mrs Stankeviciene, 57, both of Capel Close, Newport, will be sentenced at the same time for the same forced or compulsory labour offences.