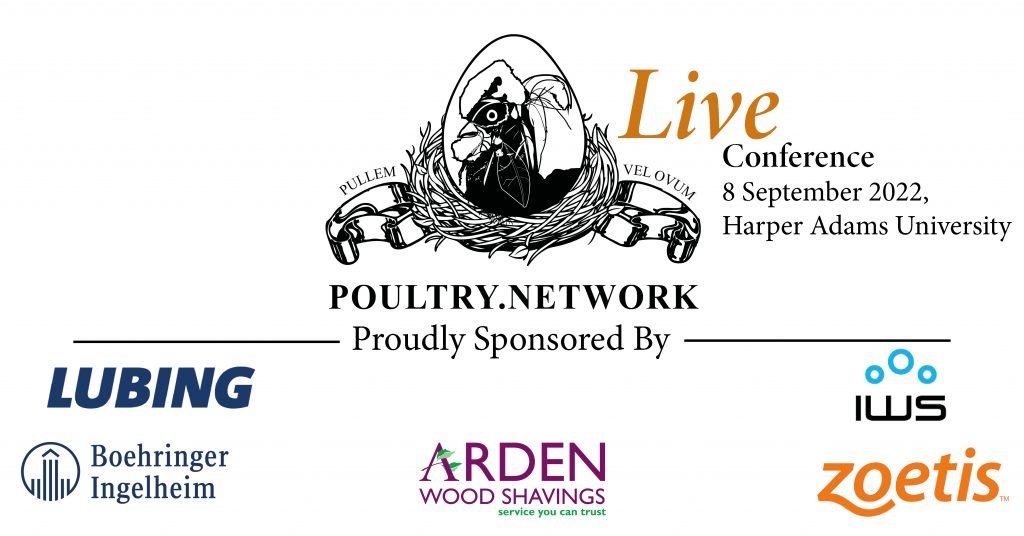 “We know that our industry faces some significant challenges when it comes to net zero and sustainability.

“Work that we did back in 2020 showed that even if we saw broad uptake across the agricultural sector of technologies that are available to us right now, we don’t even get halfway to our net zero ambitions,” he said.

“The key point is across the board, as an industry, we don’t have any silver bullets.”

A recent report from CIEL showed that the poultry sector had a relatively small carbon footprint compared with other livestock sectors.

Feed production, processing and transport are the main contributors for both broilers and layers.

He said that improving efficiency was going to be the most effective route to lowering carbon emissions, and the poultry sector already had a phenomenal track record in achieving that.

At the forefront of future improvements was a focus on alternative protein sources, particularly in the long term.

He suggested that alternatives such as insect meal, algae, and microbial proteins might have potential.

“However, there’s a big challenge in the regulatory changes that would need to happen to facilitate some of that.”

As part of any move away from soya, there was also an issue reconciling carbon footprints on-farm with the national carbon emissions inventory.

“Ingredients for livestock feed often come from other countries. This really needs thinking about because the national inventory calculations are done at country level.

“The calculations for soya production are made in the US, Brazil or Argentina, so they don’t count towards lowering the UK targets,” explained Mr Bicknell.

“That’s an issue that really needs addressing, and policymakers need to recognise that actions that we take here in the UK need to count towards the UK inventory.

Also, soya was a pretty effective feed, and it shouldn’t necessarily be the case that soya was viewed so negatively.

Modelling carried out by CIEL had shown that switching from soya to homegrown proteins produced emissions gains that were relatively marginal and not the quick win anticipated.

That said, Mr Bicknell added many environmental commentators who offer their views on food and farming regularly forget this was all about making marginal gains.

Another difficulty was the impact of higher welfare systems on carbon emissions.

“We know that the more intensive production types across all livestock systems have a lower carbon footprint, but we also know that this is an issue for shoppers and faces scrutiny from some pretty vocal lobbying groups.”

There was similar pressure in broilers to move to slower-growing birds, with another potential increase.

“Environment, efficiency and shopper expectations can often overlap, but we can’t shy away from when they contradict,” he said.

“Moving to less intensive systems can have some advantages, but if nothing else changes, the carbon cost will increase.”

Nick Davies, 2 Sisters Food Group agriculture director, tabled data from their farms showing that broilers’ carbon emissions per kg liveweight were up to 19% higher on organic farms than on standard Red Tractor birds.

For Better Chicken Commitment (BCC) birds, it was 14% higher, and for free-range broilers, 16% higher.

“We’ve got an objective to put slow-growing birds on the ground, but when we show (these figures) to interested parties who want more BCC chicken, they haven’t got the answers on how to mitigate the extra carbon.

“Their objective is animal welfare, not the environment,” said Mr Davies.

Turning to issues with soya, he said: “We know we can grow chickens without soya but haven’t got the infrastructure to scale it up in the volumes we need.”

Sophie Throup, head of sustainable sourcing at Morrisons, pointed out that pressure on retailers wasn’t just coming from carbon emissions but also land use changes.

“Most retailers have signed up to the zero deforestation in their supply chains by 2025,” she said.

Because there was no segregated supply chain between South American and US soya, they had to assume a ‘worst case scenario’.

“It’s about taking soya out of the diet if at all possible, and thinking about alternative sources.”

Morrisons planned to be the first supermarket to be supplied by all net zero farms by 2030, five years ahead of competitors, she said. And as part of their Scope 3 emissions targets, they had to look at what they were buying in.

A key aspect of the supermarket’s recently-introduced planet-friendly eggs was the replacement of soya with live insects.

“We got really excited when one of our farmers came to us with an appraisal he had seen about replacing or reducing soya with live insects.

“We haven’t got the legislation in this country to think about insect meal being fed, but we can feed live insects.

“We are taking food waste from our factories and we are sending that to be processed and fed to insects, which are being fed to hens – a groundbreaking ‘circular waste’ technology.”