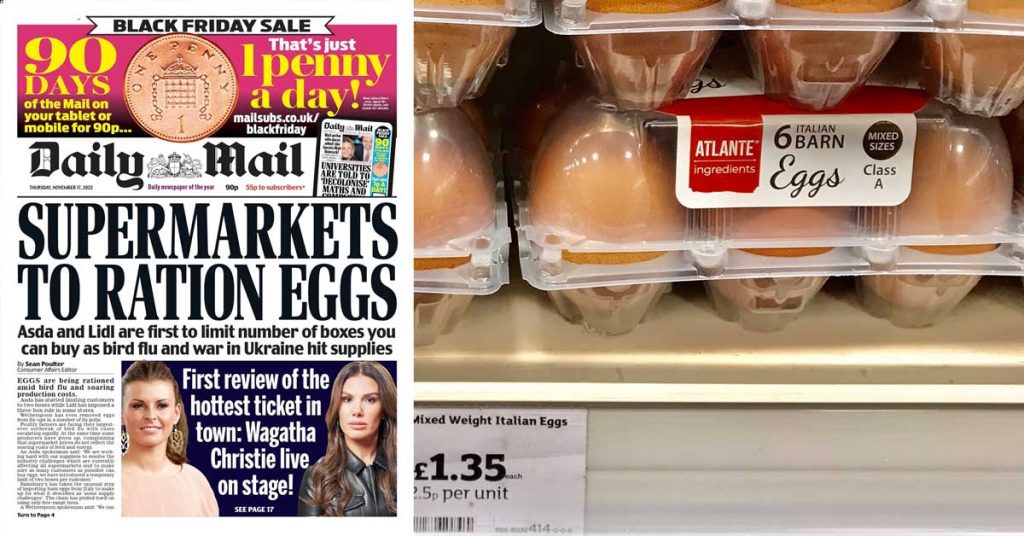 EGG shortages in supermarkets have hit the headlines in most mainstream news outlets as supermarket Sainsbury’s turned to importing fresh shell barn egg from Italy to meet demand.

As Poultry.Network reported in late October, lower confidence in the egg sector has seen fewer hens brought into production this year, with the UK laying flock down by 5.5m from its peak in December 2020. It is likely to drop by another 1.3m birds by February ‘22.

Compared with the same quarter of last year, UK output was down by over 22m doz.

The wholesale market has effectively been short of eggs for weeks, with reports of smaller cafes, shops and delis meeting demand by buying eggs at retail.

Those supply issues now appear to have fed through into supermarkets, with shoppers sharing photos of empty shelves.

Some supermarkets have also limited the number of packs that shoppers can buy.

These shortages are not a direct consequence of avian influenza, which has affected an estimated 750,000 laying hens since 1 October.

Instead, they reflect a drop in confidence that led many farm businesses to cut bird numbers or to choose not to restock sheds earlier this year.

In April, for example, almost 600,000 fewer laying hen chicks were placed on farms than in the same month of 2021 – birds that would now be producing eggs.

At the time, feed and energy costs were rocketing because of the conflict in Ukraine.

Upon the news that Sainsbury’s would be importing fresh shell egg to meet demand, Bfrepa’s chief executive Robert Gooch said he had requested an urgent meeting with the retailer.

“We have been warning for months that failing to pay farmers a price which allows them to make a profit would result in mass de-stocking or, worse still, an exodus from the industry,” Mr Gooch said.

“Seeing Italian eggs on the shelves is a wake-up call to all retailers that they can’t expect farmers to work for nothing. Enough is enough.”