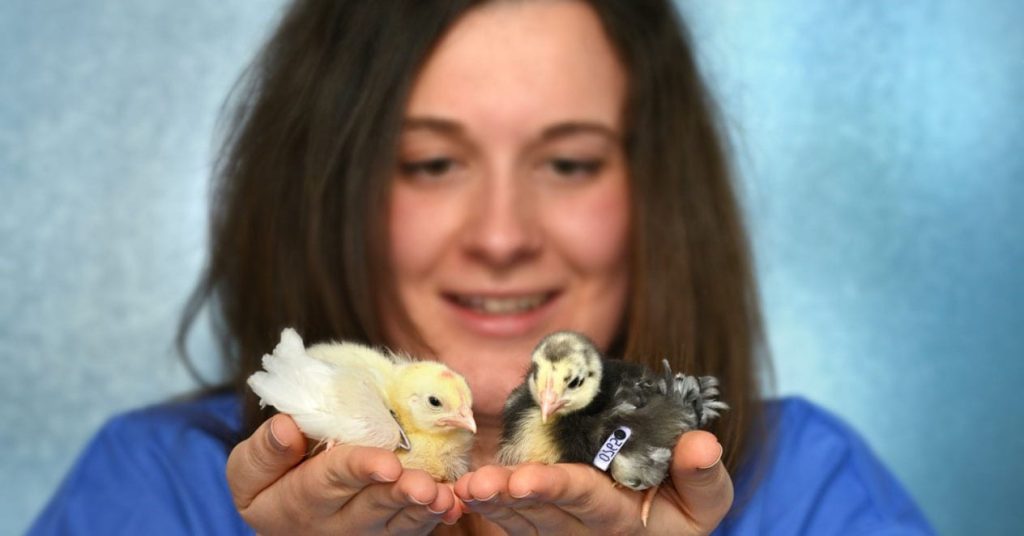 RESEARCHERS have used gene editing to introduce beneficial characteristics from one breed of chicken to another.

The application of this technology could benefit poultry farmers around the world – both large scale commercial operators and smallholder farmers in low- and middle-income countries.

Genes can be transferred from one breed into another via gene editing of embryos, in a single generation.

The method to control the reproductive genes carried by both parents – known as Sire Dam Surrogate mating – can ensure that offspring will inherit a desired gene from both parents, and exhibit the characteristic associated with that gene.

A team from the Centre for Tropical Livestock Genetics and Health (CTLGH) and The Roslin Institute, with commercial partner Cobb-Europe, demonstrated their approach by using sterile male and female chickens, known as empty nest chickens, to transfer feather characteristics between breeds.

The team removed reproductive stem cells – early-stage cells that later develop into sperm and eggs – from chicken embryos using gene-editing technology and used the same technology to introduce gene-edits into these reproductive cells from another breed.

The altered reproductive cells were implanted into surrogate parents – the embryos of chicks and cockerels that were bred to be sterile. These surrogates were hatched and mated with one another.

The resulting offspring were of the donor breed, and not that of their surrogate parents.

They also had the new traits created by gene-editing technology.

Researchers demonstrated their approach by repairing a natural genetic change that causes distinctive white plumage in the White Leghorn breed.

The chicks born to the sterile chickens now had a black plumage.

Similarly, the team introduced a distinctive curly feather, which is believed to help Western African breeds cope with hot climates, into chicks bred from Light Sussex chickens, a British breed.

The concept could allow the transfer of useful traits among the world’s 1,600 breeds of chicken and could aid animal productivity and welfare, and help safeguard against changing environmental conditions.

Dr Mike McGrew of the Roslin Institute and Programme Leader at CTLGH, said: “Chicken are the world’s most populous livestock species.

“The potential to preserve chicken breeds and introduce characteristics that will improve their wellbeing and productivity brings the opportunity to improve efficiency in the poultry industry and develop local breeds of chicken.”