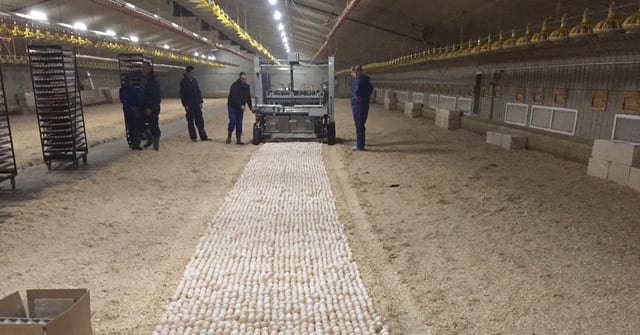 As the commercial poultry industry scaled up to produce ever-more efficiently, husbandry adapted with it to keep pace.

In nature, a bird will incubate her eggs in a nest with the warmth of her body. Where thousands or even millions of birds are needed, this is not practical.

See also: Why don’t we vaccinate against bird flu?

The answer was to build hatcheries. They mimic the optimal environment for a fertilised egg in a clean environment, allowing the expansion of both commercial broiler and layer production.

But there are certain disadvantages. Eggs tend to hatch over a 72-hour ‘window’, and the most vigorous chicks first out have the longest to wait before they are on-farm with access to feed and water.

Birds also have a relatively stressful experience of being transported from the hatchery to the farm.

That’s why several companies have, in recent years, looked at ways to either make the hatching process more comfortable for birds or to hatch them on-farm – removing the journey and time in hatchers altogether.

This trend has been most apparent in the broiler sector, where getting chicks off to a good start is critical.

One such company is NestBorn, a Belgian business that has developed a seemingly simple system that does not require any additional equipment installed in broiler farms, just slightly more litter.

Crown Chicken, now part of Cranswick, has recently adopted the system for its entire farming supply chain and the firm’s Daniel Bush says it is resulting in better weight gain but, crucially, more uniform flocks.

“The biggest advantage is the consistency and reliability,” he explains. “We do not see unreliable weights. It is now a very rare conversation to have to ask, ‘what happened in that shed?’ at the end of a flock.”

It also gives farmers a chance to have more input into the conversation around chick quality and early mortality, as the birds they rear are effectively in sheds two-to-three days before the traditional day zero of a flock cycle.

Fertilised eggs spend their first 18 days in incubators as they did before the system was introduced. The first significant change is that eggs are manually candled, explains Mr Bush. “We don’t want to take infertile eggs to the farm.”

The parent flock’s age generally influences the percentage of infertile eggs. Following this, the trays are backfilled with fertile eggs, so no space in machines is wasted.

The plan is to improve the candling process and improve hatch rates, but it’s currently at about 96%-96.5% on-farm.

Mr Bush estimates that, overall, the new system is producing about 1% more chicks; “the difference is they have got time to come out when they want to come out, you’re not set on a deadline”.

For the farmer, shed preparation is much the same as when day-old chicks arrive. The house is pre-heated for a few days to get it up to temperature and litter is laid – a little thicker where the eggs are placed.

Feeders and drinkers are lifted to allow the battery-driven NestBorn machine access. The trolleys with the 18-day incubated eggs on the setter trays enter the building, and the machine places 300 eggs at the time gently into their “nest”.

There is also the option to make use of the online NestBorn monitoring platform.

In total 8 wireless Petersime Ovoscans (each with 4 eggs) are placed between the eggs. In real-time, egg shell data is collected, as well as air temperature, relative humidity and levels of CO2, allowing stockmen to adjust the environment if necessary.

“By the evening of the day the eggs are placed you have some chicks out, and a lot will be pipping through shells,” explains Crown Chicken agricultural director Matthew Ward. “The air is a lot cleaner in sheds, in hatchers, it’s a lot tighter as it’s a confined space.

“In the shed, chicks have the space to roam and dry out, and within a few hours they are drinking, pecking away at feed and off to a good start.”

Vaccines are administered on farms, and a probiotic previously sprayed on birds in the hatchery is now delivered via waterlines.

At what would have been day 0, the team at Crown return and remove any unhatched eggs, and final chick numbers are agreed.

“The difference in the system is that the manager or owner is actively involved in the quality count,” explains Mr Bush. “It’s for him to tell us that he’s happy; that what he has is Grade A chicks, and that’s what he pays for.”

From there, it is business as usual for the broiler farm.

The NFU’s poultry board chairman, Tom Wornham, has two broiler-rearing sites in Hertfordshire. He recently grew his first flock of birds using the NestBorn system for Crown Chicken and was impressed with how it worked.

For him, there was a significant labour saving as chicks did not need to be tipped on the farm, and he felt a welfare benefit, as well.

“Mortality was down to 2%, and bird performance was good,” says Mr Wornham. “The system seemed to work well for me, and birds had access to feed as soon as they hatched.”

He added there could be another benefit in a lower carbon footprint, as lorries can carry farm more eggs than they can day-old chicks.

How the system hatches birds on Farm

1.        Sheds are set up in much the same way they are for day-old chicks. They need to be clean, disinfected and dry. The house is pre-heated, usually at least a day in advance of the eggs arriving, and feeders and drinkers have to be raised to allow the NestBorn machine access.

2.        A clean truck transports candled hatching eggs from the hatchery to the farm – its climate is carefully controlled and monitored throughout the journey. Once at the farm, NestBorn has developed a battery-driven machine which can place up to 60,000 eggs an hour, removing the need for additional labour to tip chicks.

3.        From there, the climate needs to be carefully monitored over the three days that the chicks hatch. A monitoring tool allows farmers to check egg and shed temperatures in real-time remotely. Birds hatch stress-free and have immediate access to feed, water and light.