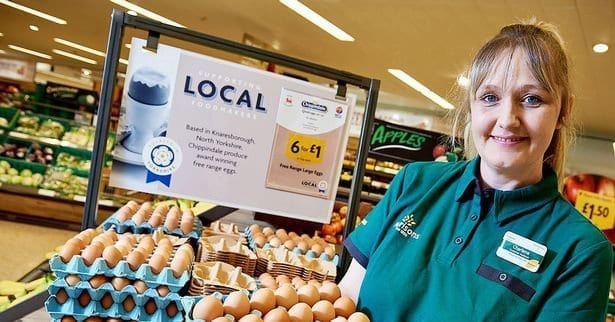 MORRISONS has said it will become the first supermarket ‘completely supplied’ by net-zero carbon British farms by 2030, five years ahead of its competitors.

It says that eggs will be the first line of products to achieve the status, which could come as soon as 2022.

The NFU has said it wants UK agriculture to be ‘net zero’ by 2040, while other supermarkets have pledged to meet the goal by 2035.

‘Net-zero’ carbon emissions entails balancing emitted carbon for any given sector with equivalent emissions that are either offset or sequestered.

The supermarket said it would establish ‘model’ farms that would look at ways to reduce carbon use, such as using different breeds, reducing the distance feed travels to farm, utilising renewable energy and low-emission housing.

David Potts, chief executive of Morrisons, said: “Climate change is one of the biggest challenges for our generation and growing food is a key contributor to greenhouse gas emissions.

“As British farming’s biggest supermarket customer, we’re in a unique position to guide our farms and help lead changes in environmental practices.

“It’s years ahead of industry expectations – and an ambitious target – but it’s our duty to do it.”

Environment Secretary, George Eustice MP, added: “The UK is the first major economy to legislate for net zero emissions by 2050.

“Our farmers will play a key role in achieving this.

“It is encouraging to see Morrisons commit to being supplied by net zero carbon British farms on such an ambitious timescale, helping to protect the environment for future generations.”