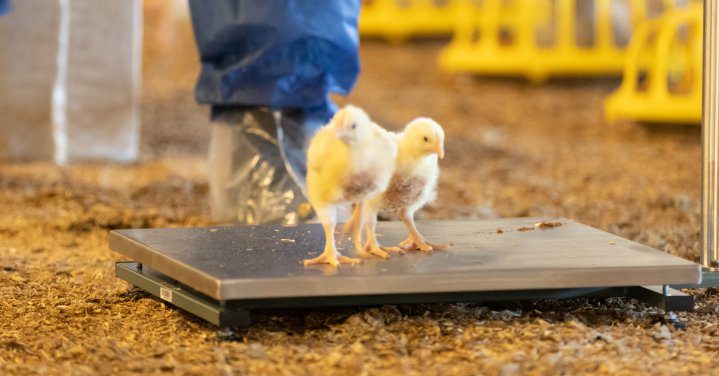 Bringing performance on a recently acquired broiler farm up to scratch called for investing in both infrastructure and monitoring software.

When Mr Lanning purchased the 220,000-bird site in Wiltshire in June 2020, he knew he had a challenge on his hands.

Previous data on the farm showed that it was significantly underperforming in several areas, including EPEF (European production efficiency factor) and daily liveweight gain (DLWG).

“But I was confident that we would turn it around,” he explains.

“Even before the first flock arrived, we had a plan of attack of how we were going to get this site back on track.

“It was currently unsustainable due to the margin per metre per week being unprofitable.

“As a result, significant change needed to be made,” says Mr Lanning.

Changes made on farm

The broiler site had several problematic areas which were causing it to underperform, and therefore it was clear it was going to be a project from the outset.

As soon as Mr Lanning purchased the site, the team got to work making changes.

“All of the factors that impact bird performance contribute to a link in the chain, and so we have kept changing the weakest link to make the chain stronger,” he says.

“As a starting point, we arranged a meeting with the farm manager for further guidance, as he knew the farm best, having worked on the site for numerous years.

“Our first change was to switch the heating supply, to increase the number of kilowatt’s (KWs) in the shed to achieve a constant temperature.

“However, this alone didn’t solve the problem in terms of efficiency and bird performance,” says Mr Lanning.

“The next investment involved fitting 25,000 drinking cups to the water line to catch the drips so that we could have a high-water pressure to encourage intake.

“We also noticed after a couple of flocks that the water quality was poor.

“The large header tank was heavily contaminated, and so we fitted a water sanitising system, as this could have been affecting bird gut health and water intakes,” he adds.

Even after these changes, and four crops in, no improvements in bird performance had been seen.

“We decided to look into the ventilation system,” says Mr Lanning. “We carried out a smoke test to help gauge the air movement in the shed, which identified that it wasn’t flowing as we thought it would be.

“Going back to the chain, it was clear that ventilation was the weakest link, as after this change, a significant improvement in bird performance was seen.”

At the same time, Mr Lanning opted to install wireless monitoring technology from MSD-owned Poultry Sense, which measures environmental and performance parameters at numerous points in the poultry house.

This meant real-time data and analytics could be accessed, allowing evidence-based decisions to be made.

Before installing the technology, data collection was a very manual process.

“Each member of staff was recording the data on a piece of paper in the shed, and no analytics were being undertaken,” Mr Lanning says.

This made it very difficult for problems to be identified and for the impact of changes to be monitored.”

Mr Lanning explains the Poultry Sense tool has supported the business in pulling everything together.

“It helped us realise that the current system wasn’t working and allowed us to see the benefits of the changes to heating and ventilation on bird performance.”

The key take-homes from making these changes are:

“This highlights that overall bird efficiency and performance has improved.

“While Poultry Sense can help you identify problems, it can also help you distinguish if changes have had a positive impact,” Mr Lanning adds.

“While significant changes have been made to this site, the improvement in performance and efficiency will show a good return on investment.

“Without Poultry Sense, this would be hard to quantify,” explains Mr Lanning.