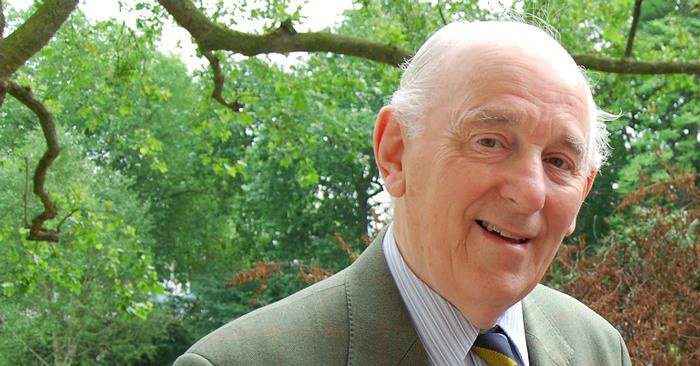 The following is an edited version of the obituary delivered at the funeral of Peel Holroyd, 15 September 1938 to 21 December 2021.

Peel Holroyd was one of the most well-known servants of agriculture of recent times, particularly the poultry industry.

His career stretched back to 1955 and saw him rise through the ranks as a graduate and lecturer at Harper Adams.

He later became a poultry product manager at RHM, a senior agricultural manager, and then a food technologist at Marks & Spencer, where he introduced traceability to the Saint Michael poultry program.

This was a forerunner to quality assurance schemes we know today, including Red Tractor.

His mantra was simple: “Quality is repeat business.”

He was immensely proud of his achievements over nearly 20 years at M&S and his close links to Lord Sieff.

A debilitating back injury cut short his tenure at the supermarket, and he then turned to running his own business, Peel Holroyd and Associates.

The consultancy covered most aspects of the food supply chain from farm to plate, including farming, production, processing, distribution to consumers, and retailing across the globe.

However, the one aspect of the food supply chain that Peel was completely useless at was cooking.

How ironic is it that he spent a lifetime trying to improve the eating quality of food (with poultry and his work with Duroc pigs), but which he, himself, could ruin in five minutes in an oven!

Peel travelled the world speaking at many different engagements during his proud career.

He advised numerous companies and Governments; chaired dozens of organisations; was a visiting lecturer in food and agriculture to colleges and universities and – perhaps most import to him – made hundreds of friends.

He was particularly proud of the Temperton Fellowship at Harper Adams University and the 100 Club at The Royal Agricultural University, Cirencester.

Harper Adams was the home of the National Institute for Poultry Husbandry, where both Peel and his wife Margot studied and met, with Peel lecturing from 1961 to 1964.

In 1986, they and R G (“Dick”) Wells published a book in memory of Harold Temperton, which recorded the history of the Institute.

The proceeds of that book, together with the investments of the Temperton Trust, helped launch The Temperton Fellowship.

Each year an invited speaker would present a research report to industry experts and other interested parties at an event in London.

The range of Temperton Fellows spanned various disciplines and careers, with veterinarians, Government officials, academics, farming advisers and industry chiefs among them.

The Fellowship would not have happened without the commitment of Peel and Margot, and Harper Adams recognised Peel for his contribution with a Fellowship.

At The Royal Agricultural University, he left his mark as a lecturer and as founder, chairman, and latterly Honorary President of the RAU 100 Club.

This club created a unique and valued conduit between industry and academia, which was ahead of its time.

To recognise his significant contribution, Peel was made an honorary Member of the Royal Agricultural University in 2016.

Peel loved nothing more than nurturing and guiding young people – be it in their personal lives or careers.

He also encouraged and guided “the next generation” on the sports field.

This was epitomised by him being a rugby refereeing assessor after his days as a decent player and, subsequently, a referee himself had come to an end.

He was also a controversial no-nonsense referee, too – he is a legend in local rugby circles for sending off a whole team in one match!

Margot, plus the many hundreds of friends Peel had made during his career and through sport, were his life.

And it was a life that he wouldn’t have changed for a second. He loved his wife. His job. The travel. The church. He loved the people he met on the way – whoever they were.

From meeting and guiding royals around The Royal Show to the Lords and Baronesses he counted as friends to chatting with workers on the front line of a chicken production line, he’d relate to and be able to connect with them all.

Agriculture, and the poultry industry, is unlikely to see the likes of him again.

Donations in memory of Peel are to be divided between the Royal Agricultural Benevolent Institution and the Charitable Trust of The Worshipful Company of Poulters, c/o RC Smallbone, Starwood House, 37 Pound Street, Newbury RG14 6AE.